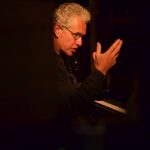 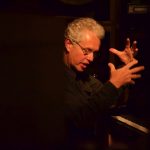 Bill Gilliam is a composer, pianist who has spent most of his musical life exploring the boundaries between new music, improvisation, electro-acoustic music and contemporary jazz. He has collaborated and performed with many experimental artists of like mind in the areas of music, improvisation, film, dance, theatre and sound poetry and continues to create compositions for new music chamber performance ensembles.

Bill was born in London, England and moved to Toronto after completing his studies at Berklee College of Music in Boston in 1981. In Canada he studied new music composition with Dr Samuel Dolin, Alexina Louie, Norma Beecroft and Alexander Rapoport at the Royal Conservatory of Music in Toronto and wrote several scores for film, dance and theatre including collaborations with experimental film makers Bruce Elder, Bruce McDonald and choreographers Philip Drube, Maxine Heppner and Marie-Josée Chartier. Bill participated in ARRAYMUSIC‘s first young composer workshop and in 1988 he received a grant from the Ontario Arts Council to attend the Inter Arts program at the Banff Centre of Fine Arts to develop a multi-media work using interactive music technology. In 1990 he received a grant from the Canada Council to produce an electro-acoustic music album “Cyclic Dancing” distributed by the Canadian Music Centre.

In 1994 Bill produced his concert “Burning Ambitions” (1994) at the Music Gallery including his new music compositions for violin, tape, percussion, piano, cello and string quartet;

In 2003 Bill performed his solo electro-acoustic keyboard music and had his new music compositions for flute, tape, piano and percussion performed in his “Solos & Duets” concert sponsored by the Music Gallery. Bill‘s music was featured at the 2003 Toronto Distillery Jazz Festival and with the improvisation ensemble “Soundspoke” at the 2004 Distillery Jazz Festival spoken word series.

In November 2004 Bill‘s String Quartet No. 2 was presented by the Canadian Contemporary Music Workshop at the Music Gallery.

in 2005, Bill produced his “Deceptive Moves” concert at the Music Gallery, where his suite of three new music compositions for mezzo soprano, clarinet, french horn, bassoon, cello, and percussion and electro acoustics exploring the theme of deception were performed. This concert also featured the setting of poems by Penn Kemp, Bill Gilliam as well as compositions by Colleen Ostoforoff.

In 2008 and 2009, Bill received grants from the Ontario Arts Council and Toronto Arts Council to compose a suite of compositions and produce a multi-media show called “Poems from a Love Triangle“, a forty five minute new music and poetry performance staged as a “radio drama” for actor, mezzo soprano, flute, clarinet, piano and percussion at the Music Gallery, May 2009.

Bill collaborated with percussionist Charlie Ringas on their joint project “Signposts” with music for prepared piano and percussion with spoken word. They performed “Signposts” at Gallery 345 in Toronto in 2010, 2011 and “Leap In The Dark” in 2012. Since 2010 Bill has continued each year to present his collaborative projects at Gallery 345 featuring actors, visual designers, poets, spoken word performers, new music works and improvisation.

In June 2018 Bill performed at the TD Toronto Jazz Festival with his experimental jazz trio Gilliam, Milmine, Pottie. In September 2018 he conducted and performed with the London Improvisors Orchestra at Iklectic, London, England and also performed improvised music at Koerner Hall in Toronto with jazz flautist Bill McBirnie. The Gilliam. Milmine, Pottie trio performed at the June 2019 Something Else! Festival in Hamilton with New York saxophonist Sam Newsome.

He is now working with Glen Hall and Joe Sorbara on releasing their new CD “Counterstasis – Refracted Voices”  in September 2019, produced with the support of the City of Toronto through the Toronto Arts Council.